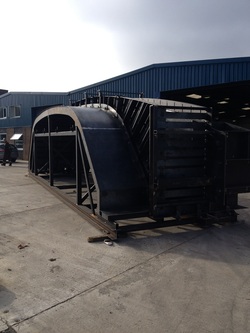 Our client, ABM Pre-Cast solutions produce a bridge system known as Conarch.
A.K. Bryan were asked to manufacture two moulds for this product, one to cast
intermediate units and one to cast end units. Once cast the concrete units span across railway tracks to produce a bridge/tunnel system.

Each mould used shutters that had a “bull nose” feature incorporated into them, this allows the units to butt up to each other leaving a gap with reinforcing bar projecting from each unit, this is then filled with insitu concrete which ties the units together. 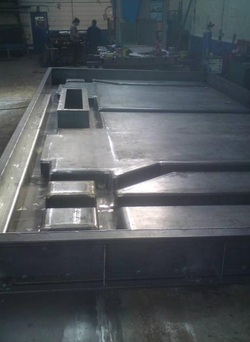 A.K. Bryan were asked by P.C.E to design a mould to produce cell floor slabs for a 40 cell detention block. The mould was to cast a double cell floor slab. All floor to wall corners were to have large radii, which meant that every plate forming the floor had to be
developed by the draughtsman to ensure good quality joints to all plates.

The mould had to be built to cast a mock up of a single cell, then had to be altered to cast the final double cell slab. As well as the cell floor slab we had to produce shuttering and a radius' coffer to create the corridor slabs. These required recess formers to allow the
cell door fabrication to be fitted on site. 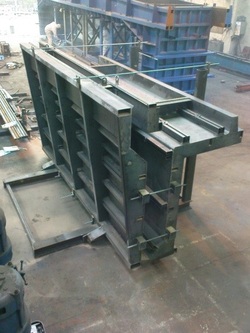 Here at A.K. Bryan we produce many different
types of parapet unit. These have been made in all different shapes and sizes.
Some have protruding reinforcing bar, whilst others have removable cores for fastening on site.
All parapet moulds we produce use wheel away front shutters, so that minimal space is taken up in the pre-cast factories. As with most parapets these had drip grooves, but we also had to make removable rebate formers so that stainless steel trims etc. could be fitted by the contractor. 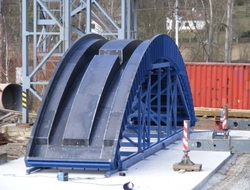 A.K. Bryan were asked to design and manufacture 2 moulds to produce arched
roof sections. The concrete units produced from these moulds would form bridges over Prague's new ring road.
Each pre-cast arch would be approximately 17 metres long , 2.5 metres wide and stand at a height of around 3.6 metres. Each mould used around 136 meters of 10x10mm steel chamfer, to remove sharp external corners formed on the pre-cast unit.

The moulds were transported to Prague in
curtain sided trailers where they were levelled in and erected by A.K. Bryan.
The twin span arches, which are both approximately 50 metres in length and have an overall span of around 40 metres are amongst the largest ever constructed in the world. 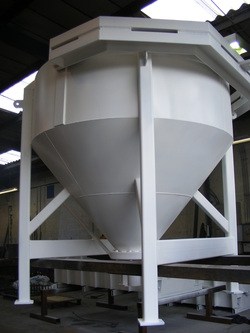 Here at AKB, we can manufacture bespoke concrete skips. Made to your requirements they can be any shape and size. This particular skip had a hydraulic hopper release. 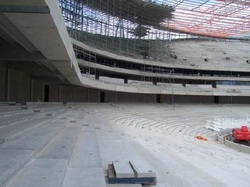 At A.K. Bryan we have produced terrace moulds for many different projects. These have included:
- Wembley Stadium,
- Twickenham Rugby Stadium,
- Emirates Stadium,
- Aintree Racecourse
-Newcastle FC.
Along side the terrace moulds we have also made shuttering to produce dormitory wall units and moulds for step units.
Our client, Solway Pre-Cast had the contract to supply pre-cast concrete units for the Scottish National Arena, designed by architects Foster & Partners. All terrace moulds for this contract were radial to achieve an amphitheatre effect. In total 11 different moulds were required for this project. 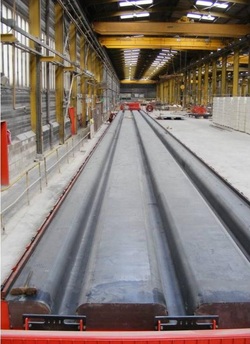 A.K. Bryan were approached by S.C.C. to produce two “Triple Tee” floor slab moulds which would produce units to be used in car parks. The moulds were made in four sections at our premises, then transported to S.C.C.’s Stockport works, where we levelled them in and joined them together to
produce a finished mould with an overall length of 61 metres.

The moulds were designed to have flexible heating pipes and insulation fitted, which would speed up the curing times of each unit. The outer shutters were designed to cast two different unit widths and were held in place by a wedge system. 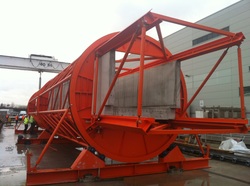 After supplying our client, Explore Manufacturing with a steel mould to produce a pre-cast concrete footbridge (which was cast upside-down), they then needed something to turn the unit the right way up safely.
A.K. Bryan came up with a design that utilised three rings split at mid-point  to create a removable top & bottom section. The three rings were joined together with tube & all steel work calculated to stop twisting and flexing during the turning of the frame.
Once the footbridge was clamped in to the frame it was turned through 180̊ by two electric winches, one to rotate the frame and one to act as a brake.